Each and every day, 50 Aussie women will hear the words “You have breast cancer.” Having previously watched her own mother’s journey after receiving that sentence 12 years ago, Monica Loeffler was inspired to help others to survive those terrible words.

Luckily, Charter Hall is totally supportive of employees’ passions to make a difference in their communities and Monica’s drive to raise money and awareness for breast cancer. The Charter Hall Pledge 1% also enables Monica to work within a ‘culture of giving’ where 1% of our people’s time, our spaces and our profits are donated.

Monica was part of a group of Charter Hall people who raised funds for the National Breast Cancer Foundation (NBCF) - an organisation she is very passionate about after her mother survived breast cancer and was consequently able to inspire others to take part too.

The results were astounding. With Monica leading, 23 of our people took it upon themselves to raise vital funds for breast cancer—with a staggering $104,686 raised in a 3-month period.

Having fun to raise funds

To raise funds for NBCF, an assortment of activities took shape, where Monica was able to put the ‘fun’ into fundraising for the charity.

“People donated different things, so we could do a raffle. We did a trivia night for Charter Hall and National Breast Cancer Foundation employees, which was a lot of fun. We also did $5 pink cocktails at our Friday drinks, which we called ‘pink drinks’ - and donated all of that to the charity.”

Other fundraising events included two team members running the half marathon and a Tuesday morning TED talk, where NBCF merchandise was sold, given Dr Sandra O’Toole, who is making great strides towards the NBCF’s goal of zero breast cancer deaths by 2030.

One percent makes a big difference

Last year alone saw 330 volunteer days given from 81 per cent of our people. Some of these hours were given in support of community groups, either in teams or individually. Others, like Monica Loeffler saw a fundraising and volunteering opportunity and inspired others to get in on the action, with Charter Hall matching her fundraising to the tune of $45,000.

“This is the first time we’ve done anything internally to this scale. I think what it shows is that people in the company are really, really giving. They really do care. And especially when they know that Charter Hall’s going to match it - it shows they really care about their people".

“It shows the overall culture. In spending all this time and giving space and money, it’s about caring for other people. I think that’s important for everyone to know.”

Our fundraising efforts culminated in a sponsored bridge climb–which Monica says was a fun reward for their hard work. Two teams fearlessly braved the lofty heights to be rewarded with glorious views from the summit. Although this was the final fundraising expedition for the team, it wasn’t the end of their experience with NBCF. 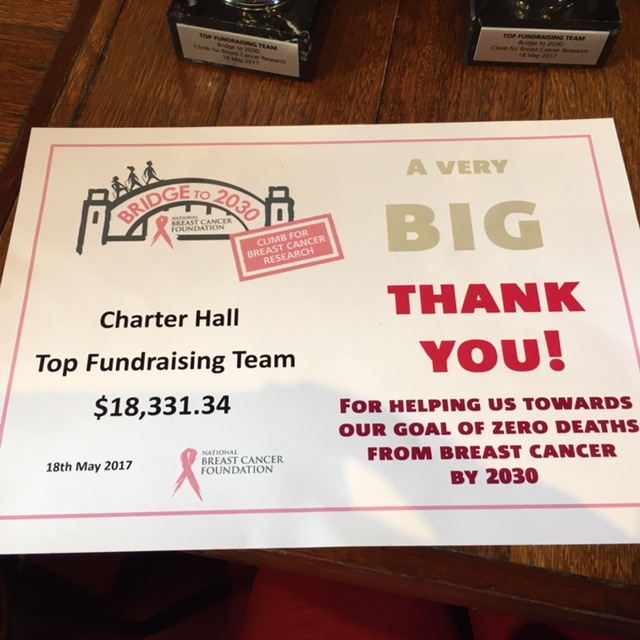 “For two years in a row, we [Charter Hall] were the biggest donors to the National Breast Cancer Foundation. Because of that, we were able to meet researchers within the foundation and this year we actually got the choose what research projects that money went toward.”

Although Australia has one of the best breast cancer survival rates in the world, the risk of breast cancer increases with age. Given our ageing population, it makes the work that Monica and our culture of corporate giving, all the more important.

“To see something and think - Wow! That is going to save someone’s life one day - well, that’s pretty amazing. You feel like you’ve done something really good".

“Especially those of us who have been touched by it now or in the past. It’s pretty powerful.” 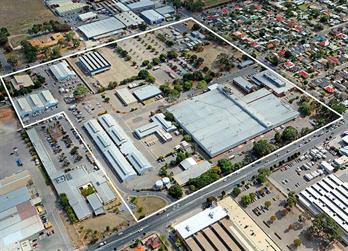 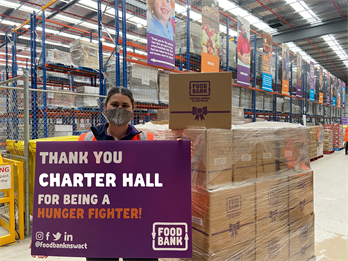